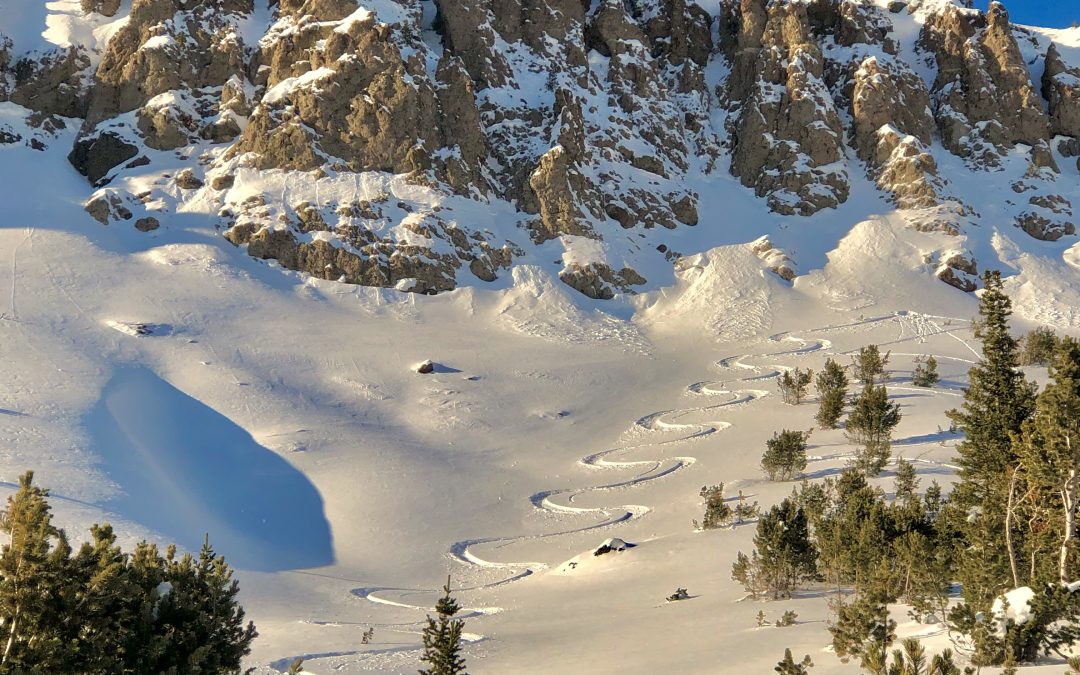 The quality of preseason skiing conditions in Tetons and Togwotee Pass areas varied greatly depending on aspect, elevation, slope angle, exposure to wind and one’s willingness to explore.

North facing terrain in the Tetons above 9,000′ served the best conditions resisting surface crust formation and holding the deepest snow. West facing below 10,000′ is generally a sage brush bushwhack albeit it for the occasional cross loaded terrain feature. Anything with much of a southerly click now has a crust. Representative depth of snow around 2′ at 9,000′. 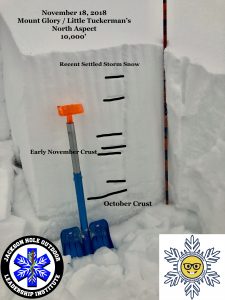 The Togwotee Pass area above 9,000′ was resisting crust on lower angle terrain, saw little wind over the weekend and saw consistent snow depths over 2.5′ on East, South and West aspects. 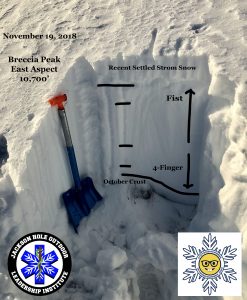 The snowpack structure found in both areas traveled was rightsize up, small grained facets well over a basal crust that is not reactive in tests. While the snowpack is what we would consider stable the structure is weak. The take home message is that the oncoming storm is going to load a weak grained snowpack rapidly with a lot of water.

Over the past few days there has been no precipitation although there has been some wind transport. The following images are a good representation of how weak the structure of the snowpack is and how a small load is easily triggered.

A small wind whale on Snow King with a shallow windslab over facets. 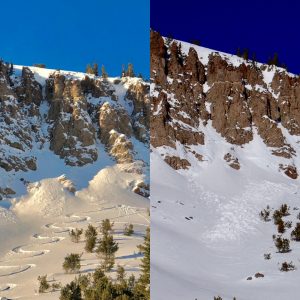 With the oncoming storm, here is what I expect “in” and “post storm” for at least the first 24 hours following precipitation…

Easily natural and skier triggered avalanches in start zones as slabs will develop on a layer of facets or facet/crust combo. If precipitation exceeds an inch of water I would expect the avalanches to be large and destructive…size 2.0 and greater. If caught, these avalanches will run over shallow snowpack increasing the consequences of being raked through rocks and vegetation.

We should get a good addition to the height of snowpack this weekend. Keep in mind the season is a marathon and it barley has even begun…It’s the Holiday make friends and family the priority. If you do go out keep it safe by choosing simple terrain that you are familiar with and check the Bridger Teton Avalanche Center for more information!